← more from
Glitterbeat Records
Get fresh music recommendations delivered to your inbox every Friday.
We've updated our Terms of Use. You can review the changes here. 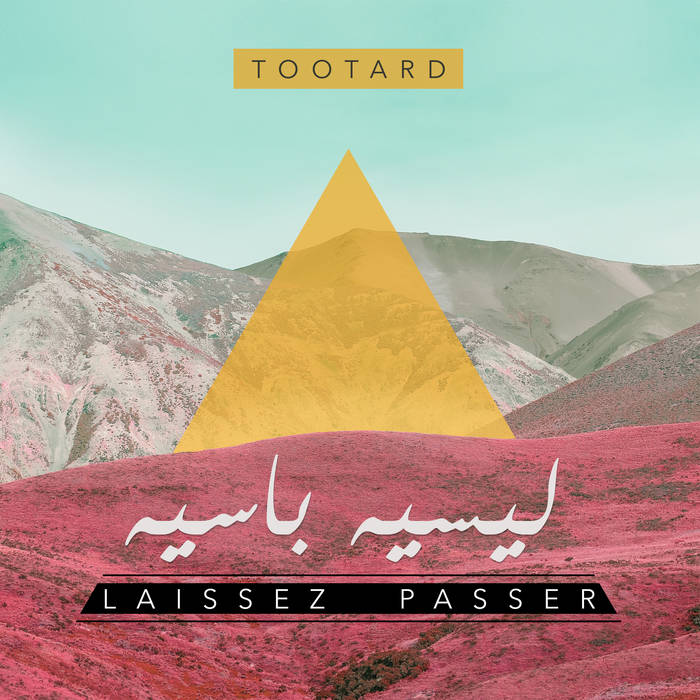 Love Your Shelf So good! Thank you for this precious pieces :) Favorite track: Sahra.

do-it-youssef Very nice militant album from the occupied Golan , don't give up this fight for freedom !

alliwant Named for the document that serves the stateless as an informal passport, Laissez Passer is a testimony to creativity in precarious circumstances, in addition to being a collection of wonderfully original songs.
more...

I do not exist on an ID card

A string and a piece of wood are my gunpowder

A Laissez Passer. Let him pass. That’s the document the stateless carry. It’s all that those from the occupied Golan Heights possess. Since 1967 the area has been part of Israel, but the inhabitants aren’t Israelis. They don’t have any citizenship. They don’t have passports. Just a Laissez Passer. And for the members of TootArd who all grew up in the village of Majdal Shams in the Golan, it’s a very apt name for their new album.

“Laissez passers are special situation papers,” explains singer and guitarist Hasan Nakhleh. “It took us a while to realise the effect. We’re permanent residents in Israel, but not citizens. We have no travel documents. When we travel we need the laissez passer. With no nationality, we’re officially ‘undefined.’”

But in statelessness, the five-piece has discovered musical freedom. TootArd grew up understanding that borders are something imposed by governments, lines that only exist on a map. On a disc, in concert, they can go wherever their imagination carries them. They carry their citizenship inside.

“What we do now is the result of everything we’ve ever done and heard,” Nakhleh says. “We began listening to Tuareg music and we fell in love with it. It resonated with us. North African music is something we’ve heard since we were children. We all grew up with classical Arab music. In finding our own sound, we’ve discovered things from all over.” With Laissez Passer, the past has helped create the future.

On the title cut, Nakhleh notes, “the first verse is the reality, the second is our solution. Our people are stateless. We have no flag, no sense of belonging. It also reflects our emotions. We feel undefined, we don’t know where we belong, when everything in the world tells us we should belong. People always want you to say who you are.”

With its insistent riff that evokes the space of the desert, glorious driving, funky percussion, and an electric guitar that Nakhleh modified with extra frets to sound like an oud, the song builds a manifesto that bonds West Africa and the Maghreb to the Levant. It’s a thrilling opener; more than that, it’s a very catchy one, with the subtle reggae flourishes adding a very organic, international feel. But those were a natural touch for the band, a nod towards their musical beginnings.

“When we started out in Majdal Shams, we played reggae covers,” Nakhleh recalls. “My family is made up of musicians, I learned classical, then Western classical, and discovered more, especially Bob Marley. With reggae, we learned how to make a groove. Then we started to experiment.”

Beginning in 2010, TootArd played all over the Golan Heights, then travelled further, to Jerusalem, Palestine and beyond.
“We gigged a lot. But by 2014 we felt it was becoming a loop, and we all wanted to change things in our lives. We just needed to stop. I moved to Europe, first to Berlin, then to Bern. Others went elsewhere. But when we’d all go home, we’d get together and perform a concert in our village.”
Two years passed, and the band members missed the spark of working with each other. The time was right to pick up the reins.
“My brother Rami, who plays drums in the band, and I had been preparing things. We had new material that we thought was different, that said something unique. Everyone came together and we recorded the album in four months. We all have more life experience now. The music is fresher. We feel we’ve moved ahead.”

Laissez Passer is the sound of a band that’s found its voice. The songs seemed to be pulled from the air, to have found them, whether it’s the catchy optimism that transports “A’sfur,” the biting groove that propels “Oya Marhaba,” or the flickering shadows-and-light shifting guitarscape of “Sahra.”

“That one’s very simple,” notes Nakhleh. “The lyrics are just one sentence, on the chorus. Sahra is the time when it turns dark and everyone comes together. That’s what we used to do in Majdal Shams, because there’s nothing else to do. We wanted to give a sense of place and time.”

The album closes with the yearning “Syrian Blues,” a gaze across the Golan Heights into the distance and history of another country.
“It’s something calm to finish, a very emotional quality. Our region used to be a part of Syria. Historically we’re Syrians, but I’ve never been to there. I feel the music has an emotional quality, and sadness in the harmonies. I even wrote it in the Rast scale, the one that’s most used in Arabic music. I thought it would evoke Syria.”

The result is an Arabic blues, the quiet, sad music of people who have a home but no nationality.

TootArd are not ‘undefined’; they’ve fashioned their own identity in their music, creating a bond of the stateless that reaches from the Levant to the Tuareg – another people without a real home - and reaches out far beyond. Let them pass.

Bandcamp Daily  your guide to the world of Bandcamp

Mille Petrozza stops by to talk about the new Kreator album, plus music by Trauma Bond